About Us
Home | About Us 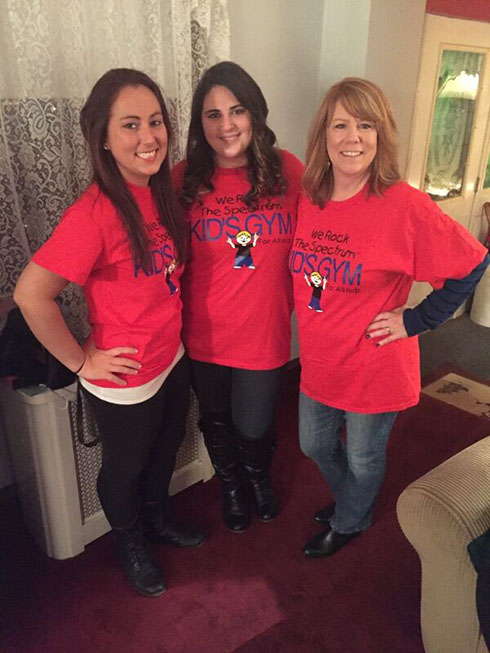 Let us introduce ourselves. We are Barbara Dickson, Jennifer Dickson, and Nicole Denicolo. Our dynamic is unique compared to the other owners of the We Rock the Spectrum franchise, with most of them being married or single parents of children with special needs. Our trio, however, consists of a mother, a daughter, and a lifelong friend. You could say that it was a joint effort that resulted in our happening to come across We Rock the Spectrum and then deciding that it was a business of which we had to become a part. Besides knowing each other on a personal level, all three of us work for SPIN, Inc. SPIN, Inc. is a non-profit organization whose mission is to provide a life of possibilities for adults and children with intellectual and developmental disabilities and/or autism. You would think that our professional backgrounds are the reason we decided to open a sensory gym, but each of us also had other specific reasons that motivated us to buy this franchise.

Barbara, a stay-at-home mother for 11 years, has been on her personal “autism journey” for 15 years. She is the mother of three children; Jennifer, 24; Matthew, 21; and Lenny 16. Her son Lenny was diagnosed with sensory processing dysfunction at age two and autism at three and a half. Barbara has seen first hand how sensory input improves every aspect of a special needs child’s functioning. Since he was two years old, Barbara worked hard to provide Lenny with sensory therapy and professional support — everything ranging from OTs, PTs, and STs, to occupational and speech therapy, to support classrooms, therapeutic support staff, and more. By the middle of third grade, Lenny had transitioned out to a regular educational classroom setting, although he still required the help of the TSS staff. His additional services ceased at the commencement of seventh grade. He is now a Junior in high school with plans for college. Barbara believes his accomplishments and successes are a result of all the sensory input he had as a small child. Barbara began working as a part-time paraprofessional aide substitute in early intervention and autistic support classes for SPIN, Inc. in Northeast Philadelphia in March of 2013. In September of the same year, she was hired for the permanent part-time position of Family Resource Coordinator. In that position, Barbara provides emotional support, as well as resource information, for parents. She holds parent support group meetings at two locations each month, has been the facilitator for sibling support groups, and serves on the Philadelphia Autism Centers for Excellence advisory board.

Jennifer is Barbara’s oldest child. She has had a passion for helping children since the age of seven when her brother received his diagnosis of autism. She used to sit with all of Lenny’s therapists who came to the house, asking questions and picking their brains on what she could be doing to help her little brother reach his goals. This passion led her to go on to La Salle University, from which she graduated cum laude with a Bachelor’s Degree in Psychology. She began her professional career the day after graduation as a Therapeutic Support Staff member at SPIN, Inc. She now has the opportunity to help children like her brother and also to create a connection with the families she supports because she knows both the professional and personal aspects of autism. She also works at the Summer Therapeutic Activities Program (STAP) and the afterschool program at her company. She is responsible for creating activities geared toward working on building social and sensory tolerance skills for her class. Jennifer is excited to reach out to a whole new group of families and children and to watch their journey in the same way that she watched her brother and the other children she has supported throughout the years.

Nicole grew up with her family’s business being an integral part of their daily lives. Clocking out at 5pm was never an option for Nicole, having witnessed her father work long hours for what he was most passionate about. She learned quickly that the mantra, “ If you choose a job you love, you will never have to work another day in your life,” applied to her father. Wanting to mimic his success and work ethic, Nicole began to seek her own passion, always knowing that wherever the road would lead her, she would whole-heartedly jump in with both feet and would surely succeed. During Nicole’s education at La Salle University, she found that passion. Working with children with special needs and giving them an opportunity to independently succeed within their daily lives, allowed Nicole to tie together her education and her desire to help others. Soon after graduation, Nicole started working for SPIN, Inc., an agency that caters to people with special needs, where she found her calling. Putting together both her “ inherited” and learned business ethics, as well as that desire to create a better environment for children, has led her down this exciting path.

"Her goal was to let every child know that they can be successful in whatever he or she put their minds to. "